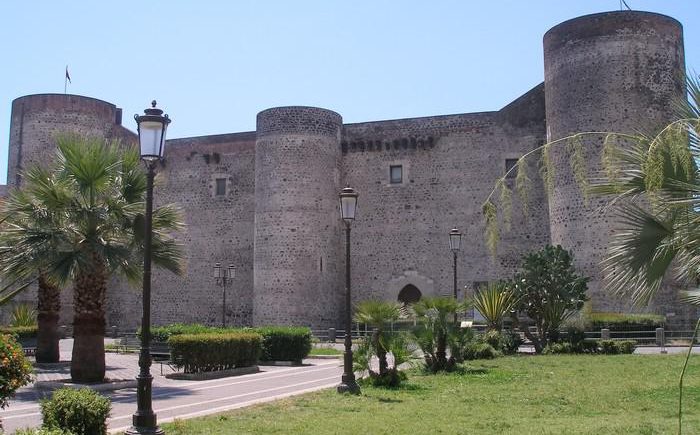 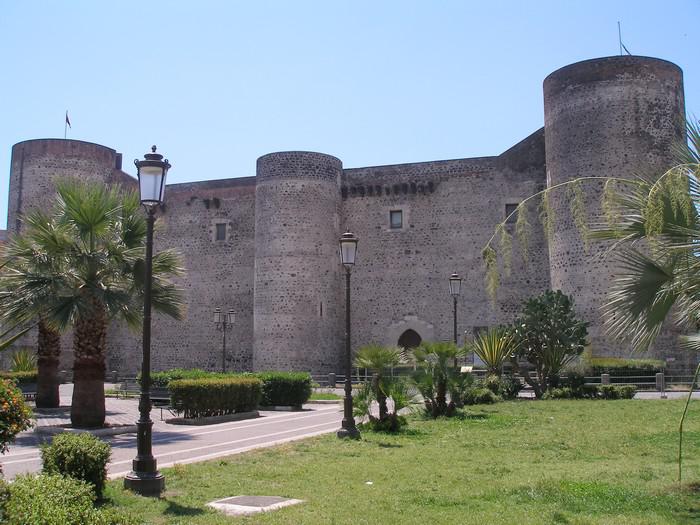 Ursino Castle, locally known as Castello Ursino or Castello Svevo Di Catania, lies in the city of the same name, in the Catania province on the island of Sicily in Italy.
Ursino Castle was built between 1239 and 1250, by the military architect Riccardo da Lentini, on the order of Frederick II, the Holy Roman Emperor. It served as part of a system of coastal defence but also as a symbol of royal Swabian power. It was built on a rocky promontory, high above the sea connected by an isthmus to the city and the city walls. It was built as a square fortress with circular corner towers around an open courtyard.
The origin of the name Ursino is not clear. In medieval times the castle was referred to in official documents as Castrum Cathaniae, but was commonly called Ursino. Theories range from Castrum Ursus (Bear Castle), Castrum Sinus (Castle of the Gulf) to it be named after a certain Flavius Arsinius, a local ruler from 359 AD.
During the Sicilian Vespers, in 1295, the Sicilian Parliament met in Ursino Castle. They deposed James II of Aragon and elected Frederick III as King of Sicily. During 1296 the castle was taken by Robert, King of Naples, and later re-conquered by the Aragonese. King Frederick III resided in the castle from 1296 on, making it the Aragonese court and so did his successors; Peter II , Louis and Frederick IV, the Simple.
In 1397, Frederick III’s daughter Maria was kidnapped from Ursino Castle by Guglielmo Raimondo Moncada, Count of Augusta, to prevent her marrying a proposed partner.
In 1392 the city of Catania rebelled and the Aragonese royal garrison was forced to barricade themselves in the castle after which a devastating siege ensued. Between the end of the 14th and early 15th century Ursino Castle, being one of the main state-owned castles, was often the official residence of the rulers of Sicily and their courts. In 1458 the castle became the residence of the Viceroys of Sicily.
In the 16th century the castle was cared for by castellans, often of the powerful Statella family. They frequently had conflicts about jurisdiction with the city magistrates of Catania.

The military role of Ursino Castle was weakened by the introduction of gunpowder and it began to be used as prison. 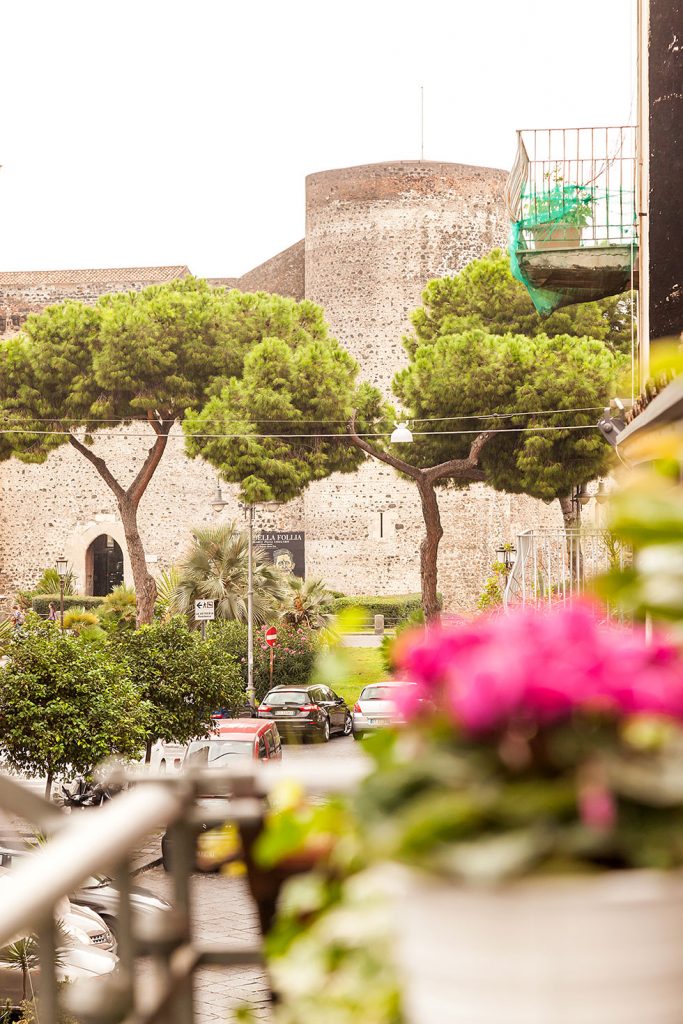 In 1669 there was a devastating eruption of Mount Etna. The city and castle were in the path of large lava flows and risked being engulfed. The presence of ramparts and moats however saved them, diverting the lava to the sea. The topography around Ursino Castle changed completely, had it first been a coastal castle positioned on a hill overlooking the sea, beach and city, afterwards it was situated 500 meters from the seashore and the surrounding ground level had risen 10 feet. In 1693 the castle was damaged by an earthquake.
After 1837 some works were carried out in an attempt to make Ursino Castle suitable for military purposes again and after 1860 it was used as barracks. In the 1930’s the castle was restored and turned into a museum.
At present Ursino Castle is used as a municipal museum. Too bad it was closed when I came by. A very nice castle.

Next post
RESERVE
Disclosure pursuant to Legislative Decree. N. 196/03 - Protection of privacy. The personal data collected through this form are treated to register you on the site, for statistical calculations, and to send, if you wish so, information on the activities and services of Il Leone Blu, with modality, even automated, strictly for this purposes. We inform you that the disclosure of information is mandatory and any refusal could result a fail to the timely fulfillment of obligations assumed by us, to provide the services required. The data controller is Il Leone Blu. You will be able to exercise the RIGHTS referred into Article 7 of Legislative Decree n . 196/03 ( ACCESS, integration, correction, opposition, CANCELLATION ) by writing to "leoneblucatania@gmail.com". Data will be treated by Officers involved in the Management and administration initiative, into Il Leone Blu. Consensus - read the information, * with the compilation of this document I consent to processing my personal data in the manner and for the purposes indicated in the same informative * through the e- mail address assignment, a fax number and / or the telephone number I allow to use these tools to send information.